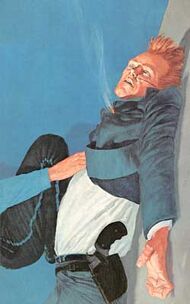 Jack Mort is a major antagonist in The Drawing of the Three whose actions have had a great impact throughout the series. Mort is a psychopathic killer,  who has a separate life as an accountant in a large firm. He plans his actions out beforehand by thinking about what a "Do Bee" would do.

Jack was responsible for dropping the brick on five year old Odetta's head which caused her to split into two personalities, which created Detta Walker. He is also responsible for pushing Odetta in front of the train that severed her legs.

Jack also pushed Jake in front of the Cadillac which killed him.

When Roland enters his mind through The Pusher door and takes over his body, he forces Mort to buy bullets for his guns (at Clement's Guns and Sporting Goods) and steal antibiotics (from Katz's Pharmacy and Soda Fountain). He proceeds to take him to the subway station while being pursued by the police. Roland kills Mort by making him throw himself beneath the train - the same one that took Odetta's legs.

Roland killed Jack before Jack had the chance to push Jake. This created the paradox that would open up The Waste Lands: did Jake really die and come to Mid-World.

Retrieved from "https://darktower.fandom.com/wiki/Jack_Mort?oldid=20572"
Community content is available under CC-BY-SA unless otherwise noted.