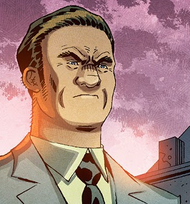 Status
Deceased/Alive
Appearances
The Drawing of the Three


Wolves of the Calla

Jack Andolini is the right-hand man of Enrico Balazar, a crime boss in New York City. Jack has a brother, Claudio, who also works for Balazar. Eddie Dean and his brother, Henry, used to refer to him as "Old Double Ugly".

Despite his appearance, Andolini is quite clever and shows a great deal of loyalty to his boss and his brother.

Jack Andolini first appears in The Drawing of the Three. Balazar gave Eddie the job of smuggling several pounds of cocaine into the United States. After Eddie is searched at customs, he sends Andolini to bring Eddie in to explain what happpened. After being questioned and searched by Balazar, Eddie convinces Balazar to let him go into the bathroom, along with Andolini, to retrieve the cocaine from Roland Deschain's world. When Eddie hears that Henry has died of an overdose, he forces Andolini through the door into Roland's world. After a brief struggle, Andolini is eaten by the lobstrosities.

Andolini reappears in Wolves of the Calla. Even though he died in Eddie's world, he still exists in the world of the rose, Keystone Earth, in 1977. In this world, Balazar and Andolini are hired by the Sombra Corporation to force Calvin Tower to sell the vacant lot and the rose to them. Andolini is originally unsuccessful when Eddie interrupts his meeting with Tower and threatens to kill all of Andolini's family. After Tower flees to Maine, Andolini and Balazar follow him there. Thanks to Mia's treachery, Andolini knows exactly where Roland and Eddie will appear so that he can prepare an ambush. Roland's reflexes prevent him from being killed immediately. Roland and Eddie kill a number of Andolini's men, but not Andolini himself.

Andolini is mentioned in The Dark Tower by John Cullum when he palavers with Roland and Eddie. He says that Andolini and his surviving men were caught trying to sneak around a police barrier out of town, but were caught by the cops and were arrested for the shootout as they were carrying weapons.

Retrieved from "https://darktower.fandom.com/wiki/Jack_Andolini?oldid=20247"
Community content is available under CC-BY-SA unless otherwise noted.