Start a Wiki
IT 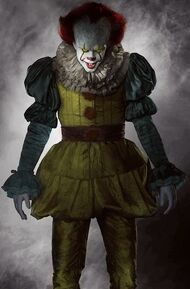 
Robert 'Bob' Gray
The Spider
The Eater of Worlds

It, often capitalized as "IT", was the main antagonist in Stephen King's IT. IT was an ancient entity that would awake about every 27 years in Derry, Maine to cause chaos and feed on people's fear. Its choice victims are usually children.

IT claimed that it was an eternal entity that was superior to all inhabitants on Earth. It was assumed to have come from the Macroverse where both The Turtle and The Other reside. Its favorite form on Earth was Pennywise the Dancing Clown (a.k.a Robert Gray) and the closest and truest form was that of a gigantic pregnant spider. From the spider "The Loser's Club" deduced that IT was female (based on ITs ability to reproduce). Upon staring into the deadlights, Audra, (Bill's wife) thinks: "Oh dear Jesus. IT is female."

Before the events of the novel IT, IT (the creature) has already awoken several times to create destruction, cause panic, and feed. IT often would possess others to murder the people dwelling in Derry.

When the novel begins, IT awakens and finds its first new victim: George Denbrough. In retaliation, George's brother Bill and his six friends in The Loser's Club go to its lair to kill IT, but just end up badly wounding IT and forcing its retreat into hibernation.

Twenty-seven years later, IT returns determined to kill the seven Losers. Upon knowing IT is back, Stan kills himself, leaving six members in The Loser's Club. However, determined to finish the creature once and for all, five of The Losers (Mike is injured) travel into its lair again. Bill Denbrough and IT engage in "The Ritual of Chüd" during which IT is assumed defeated once and for all.

As stated above, IT is deceased but in Stephen King's novel Dreamcatcher, Jonesy arrives at the Derry stand-pipe and spray painted there is "Pennywise Lives!" over the tribute to The Loser's Club. IT is also seen in Stephen King's novel The Tommyknockers; he is viewed as a supposed hallucination when one of the "becoming" goes to Derry to stock up on supplies. The Deadlights appear in Insomnia as the Crimson King passes back into the upper levels of the Tower suggesting that It's eternal body still lives on in Derry.

Connection to The Dark TowerEdit

IT, in its ultimate form, emits "Deadlights" similar to the ones that the Crimson King possesses.

Dandelo is the same type of creature as IT and when killed, turns into a massive insect. Both It and Maturin reside in the Macroverse. A portrait of Pennywise can also be seen in The Dark Tower: Fall of Gilea.

In the 2017 film Dark Tower, "Pennywise" is written on the Amusement Park ride.

Like the Crimson King, It claims to be the "Eater of Worlds."

Retrieved from "https://darktower.fandom.com/wiki/It_(creature)?oldid=20783"
Community content is available under CC-BY-SA unless otherwise noted.