Start a Wiki
It 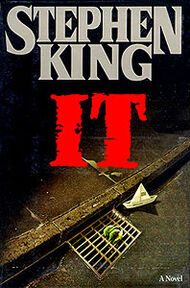 It is a horror novel written by Stephen King. It tells the story of seven children who confront a malevolent shape-shifting entity known alternatively as "It", "Bob Gray", and "Pennywise the Dancing Clown".

When six-year-old George Denbrough's paper boat is swept into a storm drain, It persuades George to reach into the drain and then rips his arm off, leaving little George in the gutter to bleed to death. Many neighbors on the block immediately hear George's screams and rush to find the boy already dead.

The following June, Ben Hanscom, an overweight child, is harassed by a gang of bullies led by Henry Bowers. On the last day of school, he hides from his tormentors in the Barrens, where he befriends Eddie Kaspbrak, whose mother has convinced him he has asthma, and Stuttering Bill Denbrough, George's elder brother. The three boys later befriend fellow-misfits Richie Tozier, Stan Uris, Beverly Marsh, and Mike Hanlon, calling themselves the "Losers Club". All have encountered It in various forms (Ben as a mummy, Eddie as a leper, Bill as George, Richie as awerewolf, Stan as boys who had drowned in Derry's Standpipe, Beverly as gouts of blood from the sink, and Mike as a flesh-eating bird) and link It with a series of child-murders. Imitating the American Indian method of using smokeholes to have visions, Ben makes a makeshift smokehole, by which Richie and Mike discover how It came to Derry, millions of years before. Bill then discovers the "Ritual Of Chüd," which he hopes will kill It and avenge his brother's death.

In later July, Eddie is hospitalized after an attack by Henry Bowers and several of his friends. Spying on them, Beverly witnesses one of the bullies, Patrick Hockstetter, taken and killed by It. Later, the Losers discover a message from It written in Patrick's blood. After Eddie is released from the hospital, Ben makes two silver slugs out of silver dollar, because the Losers believe that silver will harm It. The Losers return to the house on Neibolt Street, where Eddie, Bill, and Richie have previously seen It, and It attacks the Losers in werewolf form, primarily focusing on Bill, the Losers' leader. It is injured and flees into the sewers after Beverly shoots It with one of the silver slugs from Bill's slingshot.

In late August, It (now fearing the Losers and seeing them as a threat) then manipulates the mind of Henry Bowers, making him kill his father and providing him with a switchblade to kill the Losers. Henry recruits two of his friends, Victor "Vic" Criss and Reginald "Belch" Huggins, and the trio chase the Losers into the sewers. It attacks the Bowers Gang in the form of Frankenstein's monster, ripping Vic's head off and also killing Belch. Henry, driven insane, continues to chase the Losers. He eventually washes out of the sewers into a nearby river, and is blamed for all of the child murders. Bill enters the monster's mind through the Ritual of Chüd and discovers the true form of It is a mass of floating orange light (or "deadlights"), which he repels. After the battle, the victorious but badly shaken Losers begin to lose cohesion and get lost in the sewers, until Beverly has sex with all the boys to bring unity back to the group. After they resurface, the Losers swear a blood oath to return to Derry if It returns in the future.

In July 1984, three youths brutally attack a young gay man by the name of Adrian Mellon and then throw him off a bridge. They are arrested for murder when Mellon's mutilated corpse is found, though not all of the injuries were inflicted by them. One of the murderers claims that he saw a clown kill him underneath the bridge. Adrian's life partner, the other victim in the attack, also notices the clown but the prosecutors convince him not to mention it during the trial. When a string of violent child-killings hits Derry, Mike Hanlon—now the town’s librarian and the only one of the Losers’ Club to remain in Derry—calls up the six former members of the Losers Club and reminds them of their childhood promise to return. Bill Denbrough is now a successful horror writer living in England with his actress wife, Audra. Beverly Marsh (now Beverly Rogan) is a fashion designer in Chicago, who has married an abusive man named Tom and is regularly beaten. Eddie Kaspbrak has moved to New York City, where he runs a limousine rental company. Richie Tozier lives in Los Angeles and is a professional disc jockey using his talent for voice imitation. Ben is now thin and a successful architect, living in Nebraska. Stan is a wealthy accountant residing in Atlanta, Georgia. Until Mike's phone calls to the rest of the Losers, all of them had completely forgotten the trauma of their childhood, including their friends. After Mike's phone call, Stan Uris is in such fear at the thought of facing It again that he slits his wrists in the bathtub, writing "IT" on the wall in his own blood. Tom refuses to let Beverly go and tries to beat her, so she lashes out at him before fleeing, causing him serious injury. The five return to Derry with only the dimmest awareness of why they are doing so, remembering only absolute terror and their promise to return.

The Losers meet for lunch, where Mike enlightens them: It awakens once roughly every twenty-seven years for twelve to sixteen months at a time, feeding on children before going into slumber again. The group decides to kill It once and for all. At Mike's suggestion, each person explores different parts of Derry to help restore their memories. While exploring, Eddie, Richie, Beverly, and Ben are faced with manifestations of It (Eddie as a leper, Richie as a Paul Bunyan statue, Beverly as the witch from Hansel & Gretel, and Ben as a vampire), which are It's attempts to scare them off. Three other people are also converging on the town: Audra, who wants to help Bill; Tom, who plans to kill Beverly; and Henry Bowers, who has escaped a mental institution with help from It (in the form of the late Victor Criss). Mike and Henry have a violent confrontation at the library, and Mike is nearly killed, but Henry escapes severely injured. Henry, with the guidance of It (in the form of Belch this time), is driven to the hotel where It wants him to kill the rest of the Losers. Henry first attacks Eddie, breaking his arm, but in the fight Henry is killed. It appears to Tom and orders him to capture Audra. Tom brings Audra to It's lair. Upon seeing It's true form (the deadlights), Audra becomes catatonic and Tom drops dead in shock. Audra is left alive in It's lair. Bill, Ben, Beverly, Richie, and Eddie learn that Mike is near death and realize they are being forced into another confrontation with It. They descend into the sewers and use their strength as a group to "send energy" to a hospitalized Mike, who fights off a nurse that is under the control of It. It appears as George, but Bill overcomes the illusion. They reach It's lair, and Bill and Richie engage It in the Ritual of Chüd again. Richie rescues Bill from the deadlights and manages to severely injure It. Eddie saves them, but he is killed in the process. Beverly stays with Eddie and the traumatized Audra, who is found alive. Bill, Richie, and Ben follow It when It retreats due to injury. They discover that It is female and has laid eggs, which are about to hatch, but Ben destroys them all while Bill and Richie continue to hunt It down. During the ensuing battle, It throws Richie aside, knocking Richie unconscious. Bill crushes It's heart between his hands, finally killing It.

At the same time, the worst storm in Maine's history sweeps through Derry, and the downtown area collapses. Mike concludes that Derry is finally dying. The Losers return home and gradually forget about It, Derry, and each other. As a sign that It really is dead, Mike’s memory of the events of that summer also begin to fade, much to his relief. Ben and Beverly leave together. Bill is the last to leave Derry; before he goes, he takes Audra, still catatonic, for a ride on his childhood bicycle Silver, which awakens her from her catatonia.

Connections to the Dark Tower SeriesEdit

The creature, It, bears a striking resemblance to Dandelo. For more information about this connection, see the Dandelo page.

Stan Uris mentions at one point in his ramblings that there may be other worlds with roses and maybe in this other world the roses sing.

It also features the turtle, Maturin, as a force that stands against evil. His voice is heard in It.

The nickname, Stuttering Bill, is shared across stories. In The Dark Tower, it refers to a robot built by North Central Positronics. In It, it refers to Bill Denbrough.

Also, as Ives is listening to a voice projected from It's victims in his kitchen drain, he asks them who they are. They say, "We are Legion". Legion is another name for the Ageless Stranger.

Retrieved from "https://darktower.fandom.com/wiki/It?oldid=18960"
Community content is available under CC-BY-SA unless otherwise noted.