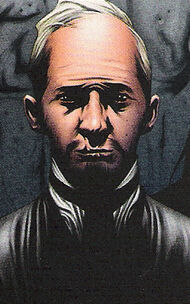 Hart Thorin was the Mayor of the city of Hambry in the barony of Mejis. Thorin appears during Wizard and Glass as well as the comic adaptation The Gunslinger Born. Thorin was portrayed as a bumbling old man with popping joints, who cares little for anything except his physical desire for Susan Delgado. He wielded very little actual power. Most of Hambry's power rested in the hands of Thorin's chancellor, Kimba Rimer.

Thorin arranged to have Susan as his gilly, a more politically acceptable version of a prostitute. He is thwarted by Rhea of the Cöos, who makes him wait until Reap Day for her to come to his bed, by which time he is dead. A few months before the Reap Day, he began to abuse Susan Delgado, touching her skin and ejaculating in his pants.

He was killed by Roy Depape, in the effort to frame Will Dearborn, Arthur Heath, and Richard Stockworth of his killing by using The Lookout. Roy believes he may have a form of 'the touch,' a form of psychic power as he speaks in his sleep about a bird with pink eyes which may be the Lookout.

Retrieved from "https://darktower.fandom.com/wiki/Hart_Thorin?oldid=13950"
Community content is available under CC-BY-SA unless otherwise noted.