Start a Wiki
“I've been known to sling some serious armament myself from time to time.”
— George
George Latigo 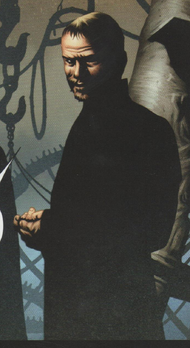 George Latigo was one of John Farson's top lieutenants. He was originally seen at an oil refinery in End-World using Slow Mutants in his operations there, not wanting to lose good soldiers. Marten Broadcloak instructed him to move the oil tankers at Citgo that were going to fuel Farson's mechanized weapons however how he manages to get from the oil refinery in End-World to the oil tankers in Citgo is a mystery and not explained. He died when he was trapped in Eyebolt Canyon and forced into the thinny.

Latigo's picture was shown to apprentice gunslingers so that they would be able to recognize Farson's lieutenants.

Retrieved from "https://darktower.fandom.com/wiki/George_Latigo?oldid=4563"
Community content is available under CC-BY-SA unless otherwise noted.