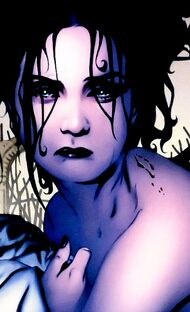 
The Gunslinger Born
Treachery
The Sorcerer

“Lord, what sins are writ upon the slate of life that this is the only way to wipe it clean?”
— Gabrielle Deschain

Gabrielle Deschain is the mother of Roland and the wife of Steven Deschain, whom she married at sixteen. Her maiden name is Gabrielle Verriss and is sometimes referred to as Gabrielle-of-the-Waters or Gabrielle of Arten. She sang the Baby-Bunting Rhyme to Roland when he was a child, which is where he first heard the word "chassit" and the early years of her marriage passed smoothly as she raised her son, tended to Steven and became acquainted with the aristocracy; the people of Gilead grew to love her.

She was seduced by the court magician, Marten Broadcloak, when he was made Steven's chief advisor, and the affair continued for at least two years, though Steven knew the entire time. When Roland learns of this, he is forced into an early test of manhood. She left for Debaria to seek repentance for her actions at Our Lady Of The Rose; she confessed to the friar there, only to learn he was Marten and so she was seduced again. Her seduction was both physical and mental, for she was persuaded into an attempted assassination of her husband as well as agreeing to steal Maerlyn's Grapefruit.

She stole the sphere, too ashamed or even scared to kill her husband. Roland confronted her, knowing she took the sphere, but he was tricked by The Demon of the Grapefruit into believing that she was Rhea and so he killed her. She died carrying a belt that she had made for Roland, presumably as a peace offering. Roland wore the blood-stained belt for many years.

She is spared from the flaming pits of Na'ar when Marten arrives too late to resurrect her by placing some of his blood into her mouth so she will reach the clearing at the end of the path. Her spirit talks to Roland for one last time saying she did not realize what she was doing, and that she wished to spare him what is to come. When her body is searched, her dagger is found and her alliance to Farson is revealed.The people of Gilead wished to see Roland hung for murdering her.

Retrieved from "https://darktower.fandom.com/wiki/Gabrielle_Deschain?oldid=20368"
Community content is available under CC-BY-SA unless otherwise noted.