Start a Wiki
From a Buick 8 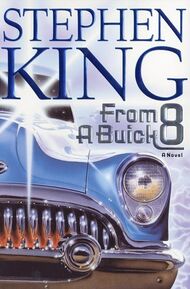 The novel is a series of recollections by the members of Troop D, a state police barracks in Western Pennsylvania. After Curtis Wilcox, a well-liked member of Troop D, is killed by a drunk driver, his son Ned begins to visit Troop D. The cops, the dispatcher and the custodian quickly take a liking to him, and soon begin telling him about the "Buick 8" of the title. It is in some sense a ghost story in the way that the novel is about a group of people telling an old but unsettling tale. And while the Buick 8 is not a traditional ghost, it is indeed not of their world.

The Buick 8 resembles a vintage 1953 Buick Roadmaster, and was left at a gas station by a mysterious man dressed in black, who disappeared soon after leaving the car to be refueled. The car is later held by the Troop D police of rural Pennsylvania in storage shed B. The car, they discover, is not a car at all. Itappears to be a Buick Roadmaster, but the steering wheel is immobile, the dashboard instruments are useless props, the engine has no moving parts and ignition wires that go nowhere, the car heals itself when scratched or dented, and all dirt and debris are repelled by it.

Sandy Dearborn, now Sergeant Commanding of Troop D, is the main narrator of the book, and tells the story to Ned, discussing various things that have happened with the car, and his father's fascination with it. The car will frequently give off what they dub "lightquakes," or large flashes of purple light over an extended period of time, and will occasionally "give birth" to strange plants and creatures that aren't anything like what they've seen in their world. Two people have disappeared in the vicinity of the car—Curtis Wilcox's former partner Ennis Rafferty, and an escaped lowlife named Brian Lippy they picked up for drunk driving and being under the influence of angel dust. It is later suggested in the book that perhaps the Buick was a portal, between our world and another.

After hearing the story of the Buick and how it has been kept secret by Troop D for so long, Ned becomes convinced that the car was somehow related to the death of his father in a seemingly random road accident. After all, the gas station attendant who first reported the Buick sitting in front of the station was the same man who, years later, would kill his father. Ned is determined to destroy the Buick, but before he can Sandy Dearborn realizes that the Buick, in fact, wants to take Ned into the world it connects to ours.

Sandy returns to the shed to find Ned sitting in it, Ned having poured gasoline under the car and holding a pistol and a match. Just as Sandy pulls Ned out, the Buick transforms into a portal, trying to draw both Ned and Sandy inside of it. The rest of the staff arrive on the feeling something bad may happen, all of them helping recall the story of the Buick's origin at their station, and manage to pull Ned and Sandy free, but not before Sandy glimpses into the world on the other side of the Buick. He sees Lippy's Swastika necklace and cowboy boot, along with Ennis's Ruger.

The book closes with Ned joining the police force after dropping out of college, and he pulls Sandy over to shed B. The Buick's window is cracked, and remains cracked without healing itself. Ned believes that the Buick will one day fall apart, having expended the last of its energy in that final attempt to draw him over to the other universe.

Connection To The Dark TowerEdit

Although Buick 8 is a self-contained story, the novel is widely considered to be part of King's The Dark Tower Series.

Retrieved from "https://darktower.fandom.com/wiki/From_a_Buick_8?oldid=20457"
Community content is available under CC-BY-SA unless otherwise noted.