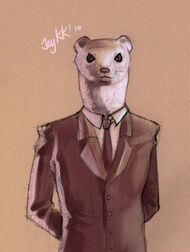 Finli O'Tego was the Chief of Security at Algul Siento. He was a taheen with the head of a weasel, which earned him the derisive nickname of "The Weasel". He considered the pus from a pimple to be a delicacy. He was good friends with Algul's warden, Pimli Prentiss. He prides himself as being one of the few taheen able to read and appreciate human literature.

It is also possible Finli was related to Humma O'Tego, Algul's previous warden.

His first appearance in the Dark Tower series was in Wolves of the Calla, where Ben Slightman the Elder and Andy called him from the Dogan. O'Tego are the one who coordinated the Wolves' attack on the Callas.

In The Dark Tower, he is in charge of security at Algul Siento. He was responsible for checking the telemetry readings measuring psychic activity and for checking anything that comes through the door from Fedic. He was shot and killed during the Battle of Devar-Toi.

Retrieved from "https://darktower.fandom.com/wiki/Finli_O%27Tego?oldid=20147"
Community content is available under CC-BY-SA unless otherwise noted.