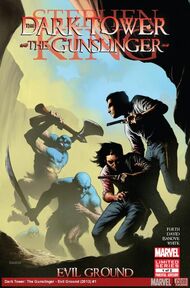 Evil Ground is a two-part story released under The Gunslinger line of comics, which actually takes place before The Little Sisters of Eluria. The first issue was released April 3, 2013, and the second June 5, 2013. They are collected in Last Shots.

Retrieved from "https://darktower.fandom.com/wiki/Evil_Ground?oldid=13893"
Community content is available under CC-BY-SA unless otherwise noted.