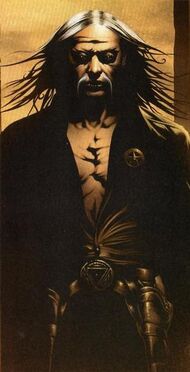 Eldred Jonas is the leader of the Big Coffin Hunters and a failed gunslinger who has a lame leg causing him to limp. He is the main antagonist in Wizard and Glass.

Born in the Barony of New Canaan he was the son of a poor yeoman who served the Andrus family. He was adopted by Fardo Andrus when he saw him gracefully exercising some horses and began to teach him the ways of a gunslinger. He befriended Fardo's other son Cort and became a master at wielding any type of weapon given to him.

However his phenomenal progress was stopped suddenly during his adolescent years when he stepped on a shard of the Laughing Mirror which pierced his heel sending him into a mysterious fever coma which he was saved from by Pierce De Curry and his phsycians, although he recovered physcially he never fully recovered mentally as the shard warped his views of the White and drew him to the side of the Outer Dark.

Afterwards he bacame a braggart and carouser, begin to quickly lose his temper when he didn't master a weapon as quick as he wished to. When he reached 18 he was confronted by Fardo who admonished him for sneaking out every night to drink and sleep with whores. Due to the Laughing Mirror this caused him to believe Fardo had singled him out as he was descendent from a poor man and so challenged him to his test of manhood.

His poor habits rendered him unprepared in using the Kashmini Nunchaku he selected as his weapon of choice and so he lost, Fardo shattering his leg with an iron wood club leaving him with a limp for the rest of his life.

He was sent west like all failed gunslingers. But like so many men who were trained for the gun, he found methods of acquiring such weapons - even if they were not the same guns, or of the same quality, as those his father had carried. Exiled he wandered Mid-World and many others through the special doors as he calls them, at one point he became a captive in Garlan where he received a back full of criss-crossed whip scars. It was not, long after this he recruited Clay Reynolds and not long after Roy Depape and they became guns for hire. He recruited Roy for his expertise in thieving, and used him to assassinate the Chairman of the Ritzy Coalworker's Guild.

As might be expected, Jonas is rather reticent about his past, though it is plain that he is a man of considerable experience. Coral Thorin notices his back is covered in scars, and expresses amazement that he had even managed to survive such a flogging, but nothing is known of this particular incident other than Jonas' own claim that it happened in Garlan, a country distant to Mejis. It seems he may have had palaver with the Manni for he knows of traveling between worlds.

He along with Clay Reynolds and Roy Depape allied themselves to John Farson when they became the Big Coffin Hunters. By the time of his appearance in Wizard and Glass he is old enough to have a wall of white hair down his back, but remains a formidable opponent, either on his own or at the head of his own ka-tet of lesserly qualified thugs, the Big Coffin Hunters consisting of him, Roy Depape, and Clay Reynolds.

Jonas' acts suggest that there was more to his failure to become a gunslinger than a lack of physical proficiency. Although cunning and resourceful, he never once expresses any higher feeling. His objection to Depape tormenting Sheemie was not out of concern for Sheemie but anger that Roy had gone about it in public. By his own admission his sexual relationship with Coral Thorin is no more 'love' than that of a pair of rutting donkeys, and it would appear that any connection he has with her is down more to them sharing a similar amoral world-wiew. (This stands in severe contrast to Steven Deschain's admonition to Roland regarding the importance of feeling in The Gunslinger.) One of Jonas' attacks upon Roland's own ka-tet involved tearing up a book and scrawling rude words while Roland's ka-tet were otherwise engaged. The unrestrained glee Jonas expresses while doing so is highly unbecoming for a man approaching pensionable age, and even more so for someone who was once considered gunslinger material.

In Hambry, Jonas is employed as an enforcer by the Barony authorities, all of whom are aware to a greater or lesser extent of his true allegiance and purpose as an agent of John Farson. Around the end of his stay in Hambry he has a conversation with Walter about his mission for Farson inside Kimba Rimer's room. He dies at the hands of Roland after Maerlyn's Grapefruit is taken from him.

Eldred makes the briefest of appearances in The Long Road Home, he is seen when Roland's soul is trapped within Maerlyn's Grapefruit and serves the purpose of taunting Roland by telling him he gave away his parties position to Clay Reynolds by shooting the Grapefruit.

Retrieved from "https://darktower.fandom.com/wiki/Eldred_Jonas?oldid=21053"
Community content is available under CC-BY-SA unless otherwise noted.