“When Eddie's in that fuckin zone, he could talk the devil into setting himself on fire”
— Henry Dean
Eddie Dean 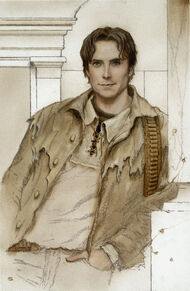 Status
Deceased
Appearances
The Drawing of the Three


The Dark Tower
Mentioned
The Gunslinger

Edward "Eddie" Cantor Dean is a member of Roland Deschain's second ka-tet. He was introduced in The Drawing of the Three. He is the husband of Susannah Dean.

Eddie was originally a 23-year-old heroin addict from New York City in 1987. He has a deep attachment to his brother, Henry Dean, despite his constant abuse (his brother was the one who got him addicted to heroin). Henry was jealous of Eddie's natural talent and uses Eddie's admiration of him to tease him until Eddie became self-conscious about it. Eventually, we find out that Eddie's talent translates into being a gunslinger. Roland notes that he was a born gunslinger.

Roland initially thought that Eddie was weak-willed, narcissistic, and foolish. Although he initially disliked Eddie's jokes, he came to realize that Eddie's sense of humor was actually reminiscent of his old companion Cuthbert Allgood.

As Eddie kicks his drug addiction and completes his gunslinger training, his character develops and he becomes reliant on his instincts and ka (a concept he originally described as "ka-ka").

One of Eddie's talents is escaping unscathed in times of trouble, something Henry recognized early on. He once declared that if he could have one person to have his back in a time of trouble, it would be Eddie because he could "convince the Devil to set himself on fire" if he had to.

Quest for the Tower[edit | edit source]

After Roland caught up to the man in black after the mountains, Walter used a deck of tarot cards to predict his future. One of these cards was The Prisoner, which depicted a young man in pain with a baboon on his shoulder,

probably a symbolic representation of having a "monkey on your back."

Roland comes across a door along the beach that reads "The Prisoner." He goes through the door and enters Eddie's mind. He finds Eddie on a plane, trying to smuggle cocaine into New York for mob boss Enrico Balazar. When a stewardess on the airplane becomes suspicious of him, Roland takes the cocaine through the door into Mid-World. The customs agents who search Eddie are unable to find any cocaine on him despite the red marks left behind by the tape.

Roland tells Eddie of his quest to find the Dark Tower. Eddie agrees to help him after Balazar roughs him up; he is afraid that Balazar will kill his brother because Balazar might think that Eddie turned on him in customs. After being questioned and searched by Balazar and his men, Eddie convinces Balazar to let him go into the bathroom to retrieve the cocaine from Roland's world. When Eddie hears that Henry has died of an overdose, he forces Jack Andolini through the door, who is then eaten by the lobstrosities. Roland gives Eddie one of his guns and Eddie proves his worth by killing several men, despite still being naked from the earlier strip-search (Roland notes that he does not know many men who could do the same). Before they return to Mid-World, Eddie grabs Keflex, an antibiotic, and aspirin, to treat Roland's infection.

While nursing Roland back to good health, Eddie suffers withdrawal from his heroin addiction. When Roland and Eddie finally reach the door to The Lady Of Shadows, they realize that it leads to New York, but in an earlier "when" than Eddie's. Eddie realizes he can find some heroin there and begs Roland to let him go through the door with him. Roland refuses to let him and Eddie threatens to kill him if he goes through alone. Roland calls Eddie's bluff and goes through.

When Roland returns through the door, he brings back his second companion, Odetta Holmes. Eddie falls in love with her at first sight, and goes through the struggles of her split personality with Roland. When Roland goes through the door of The Pusher, Odetta's dark side, Detta Walker, sneaks up on Eddie and ties him up. She leaves him by the ocean where he can be eaten by the lobstrosities, in an effort to trap Roland. When Roland returns, he forces Odetta and Detta to confront each other. The two personalities fuse to form Susannah Dean, who eventually becomes Eddie's wife.

Using him to escape the city of Lud, the tet travels on Blaine the Mono, a talking monorail with the ability to travel over 900 miles per hour.

The tet soon realize that Blaine is quite dangerous when he reveals he will take them with him on his suicide run. Roland challenges Blaine to a riddling contest and the tet do their best to find the right riddle to stump him and save their lives.

Roland urges Eddie not to say anything silly, not realizing how deeply his command wounds his companion. He falls into deep thought, feeling as if he has forgotten something he should know as he walks through his memories. The tet continues to riddle the mono.

Eddie eventually remembers his brother telling his friends that, if he had to have anyone back him up, it would be his brother, because he could "convince the devil to set himself on fire." At this point, Eddie realizes what he has to do.

He stands and begins to riddle the mono. He realizes that, when Blaine slipped up earlier (being unable to distinguish Edith Bunker as a fictional character), he had shown his weakness. Thus, Eddie uses his uniquely human weapon (one with which he is fluent) in order to defeat the Mono - illogic. He riddles the mono with jokes and, when Blaine protests that they are stupid, the tet asks him if he concedes. Refusing to give up he short circuits as he continues to try and solve the riddles.

It is at this point that Roland realizes that Eddie's silliness was the answer all along and he asks Eddie to forgive him. He realizes that his companion is far more skilled than he had previously thought.

In the final novel, The Dark Tower, Roland and his ka-tet freed the Breakers from Algul Siento and manage to stop the destruction of the Tower temporarily. The nearly dead warden of the Breaker prison, Pimli Prentiss, shoots Eddie above the eye. As Eddie collapses immediately, Roland kills the dying warden.

Eddie spends the afternoon and evening delirious with Susannah at his side. When Roland and Jake Chambers enter the room to see him for the last time, he gives a final message to each of them. He thanks Roland for being his father and tells Jake to make sure that Roland watches out for Dandelo. Eddie's death permanently breaks the ka-tet. Roland and Susannah later realize that this loss increases the vulnerability of them all. They only realize this after barely escaping Dandelo's trap, a trap that Eddie would have seen through almost immediately and warned them about.

In the aftermath of The Dark Tower, Susannah enters a door leading to New York and encounters a twinner of Eddie. Although Eddie Toren seems not to have remembered his time with Roland and the ka-tet, he claims to have dreamed about Susannah and to have been in love with her. This Eddie is also the brother of Jake Chambers, and their last name is now "Toren", the Dutch word for "tower" that was also Calvin Tower's name. This version of Eddie Dean never had the addiction to heroin that the original Eddie had.

Add a photo to this gallery
Retrieved from "https://darktower.fandom.com/wiki/Eddie_Dean?oldid=17061"
Community content is available under CC-BY-SA unless otherwise noted.