Wolves of the Calla

Father Donald Callahan is a priest who is introduced in Stephen King's Salem's Lot. He makes his first appearance in The Dark Tower Series in Wolves of the Calla.

In a flashback in Wolves of the Calla, we see he became the local Roman Catholic priest of the small Maine town of Jerusalem's Lot after he had been shuffled through a number of parishes because of his alcoholism. Callahan presided over the funeral of Danny Glick, a young boy who was, unbeknownst to the townfolk, killed by a vampire; over time more people disappear and Ben Mears, a local writer, convinces Callahan that vampires exist and enlists him to help.

After saving Mark Petrie from the head of the vampires, Kurt Barlow, Callahan's faith falters and his crucifix's power over Barlow fades as well. Barlow tears open his own throat and forces the priest to drink his blood. The blood doesn't turn Callahan into a vampire, but it marks him. In Callahan's own words, it was the "Mark of Cain."

Defeated, Callahan returns to his church, but is refused entrance and burns his hand on the door. Callahan leaves the town on a bus, bemoaning how "unclean" he has become.

After fleeing 'Salem's Lot, Callahan arrives in New York City, and becomes a vagrant. Now able to sense vampires, he realizes that they live and hunt all around him. During this his alcoholism gets worse but after he starts working at a homeless shelter, he begins to recover. Befriending several people, such as Rowan Magruder and Lupe Delgado Callahan later develops a deep fondness for Lupe and later admits to having fallen in love with him. He wonders if this means he is gay, but despite a brief kiss on the cheek, nothing physical occurs between them.

Callahan learns eventually of three types of vampires. Type One, Two and Three. After Lupe is infected by a Type Three vampire and dies from AIDS, Callahan begins to kill vampires (mostly Type Threes) which attracts the attention of the Crimson King and his soldiers, the "can-toi".

The Hitler Brothers are hired to find Callahan and later find and attack him carving a cross on his forehead, intending it to become a swastika. But before they can finish the swastika, Callahan is rescued by Calvin Tower and Aaron Deepneau, two men who figure prominently later in Roland's quest. The Hitler Brothers flee, and are later killed by the Low Men.

Callahan is later lured into a building by Richard Sayre, a Low Man, and several vampires. Rather than being infected, he jumps out a window committing suicide.

After his death, he wakes up in the Way Station, where he encounters Walter o'Dim who gives him Black Thirteen. Walter apparently does so in the hopes that it will kill Roland Deschain later in his journey. It transports him to Doorway Cave outside Calla Bryn Sturgis, where he leads a new life and over the next five years attempts to teach the locals his religion.

Quest for the Tower[]

Wolves of the Calla[]

Roughly every twenty-three years, the Callas are raided by Wolves, which turn out to be robotic soldiers serving the Crimson King. These Wolves steal half of the Calla's children, who return a few months later "roont". "Roont" (ruined) children are sterile, mentally handicapped, grow to be larger and stronger than other children, and die painfully at a younger age. When Roland and his ka-tet arrive, Callahan seeks their help to defeat the Wolves. During their stay, he shares with them his story since the events of Salem's Lot. The Wolves are defeated with the help of the ka-tet, but Susannah becomes possessed by the demon succubus known as Mia and escapes via the Doorway Cave. There, Callahan discovers a copy of the novel Salem's Lot, in which he is a major character, causing him to question his reality.

Immediately after the events of the previous book, the ka-tet regroups in Callahan's house, where they lay down their plans of action; Roland and Eddie would follow Susannah to New York while Jake and Callahan would be sent to Maine, in order to visit Calvin Tower (the man who saved Callahan from the Hitler Brothers) as well as Stephen King, in order to ensure that the remaining books are written. While there, Callahan planned on questioning King about his existence, but something goes wrong when the door is opened. The group is uncontrollably sucked through and separated, with Roland and Eddie ending up in Maine and Jake, Callahan, and Oy landing in New York City in the year 1999.

The trio lands violently in the middle of a busy street, and Oy is very nearly run down by a speeding cab. Preventing a potentially deadly response from an angry Jake, Callahan beats down the aggressive driver and bribes him (before Jake had the opportunity to shoot him), and they remove themselves from the scene.

Thanks to Jake's psychic connection with Susannah, they find the hotel where Susannah/Mia left Black Thirteen. They attempt to remove it safely, but it awakens and forces them both to their knees, urging them to murder each other. They nearly succumb to the suicidal whisperings, but Callahan uses his restored faith to silence the orb, putting it back into its slumber and saving their lives.

In search of a safe storage place, he and Jake move Black Thirteen to a long-term storage locker underneath the World Trade Center, with the hope that either it will stay dormant or Roland will at some point come to destroy it. (Rather aptly, they comment on how a building falling on it might destroy it, foreshadowing that the future terrorist attack will be the end of the crystal ball.)

They go to the Dixie Pig, the restaurant stronghold of the Low Men and vampires where Susannah is being held, where they prepare to ambush the unknown forces within.

Jake and Callahan burst into the Dixie Pig, where they are greeted by a preponderance of Low Men and lesser vampires, as well as a gathering of "Type One" vampires (known as The Grandfathers in Roland's world, of which there are only a small number in existence).

Seeing the overwhelming odds against them, Callahan sends Jake on ahead to rescue Susannah while he draws their attention. After dispatching several Low Men and Type Ones, he is goaded to toss away both his cross and the sigul of the turtle (the magical ornament that incapacitates the Low Men). At this point Callahan realizes what he did not understand while facing Barlow in 'Salem's Lot; the power of his faith transcends such objects.

Through his newfound faith, Callahan is able to hold his own against The Grandfathers while hypnotizing the lesser creatures with the turtle, allowing Jake to reach relative safety. He was eventually overwhelmed and swarmed by the vampires after being assaulted by one of the low men. Before the beasts can take him, he once again escapes their clutches by shooting himself under the chin. Before taking his own life, he converses briefly with Roland, who bears witness to the scene across time and space. His final words to Roland and in life were a benediction to the Gunslinger: "May you find your Tower, Roland, and breach it, ...and may you climb to the top!"

Jake in particular was disturbed by his death, and the ka-tet mourned the loss of their friend and compatriot. When Roland finally made it to the Dark Tower, Callahan's is one of the names shouted by Roland as he walks through the field of roses, showing Roland's respect and love for the redeemed Priest. 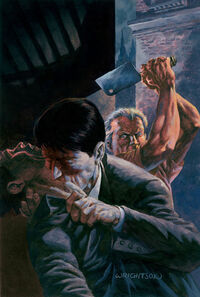 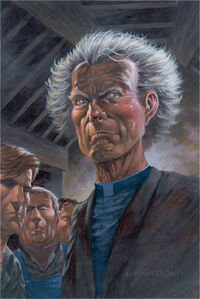 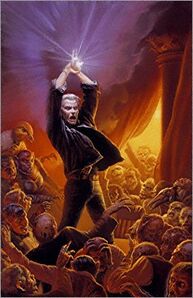