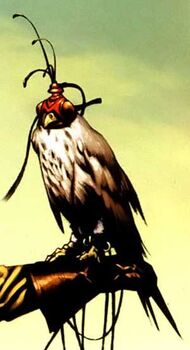 David was the hawk of Roland Deschain. He was named after the character in the biblical story of David and Goliath. Cort once said that, "The hawk is God's gunslinger."

Roland trained and "friended" it over the course of years. He chose David as his weapon when he chose to try the test of manhood early. This choice threw Cort off guard. Thanks to David he was able to pass it and earn his guns, but David died in the fight. Roland and Cuthbert buried him that night.

Roland vows to fire one shot into the air in rememberance of David on the anniversary of his death.

Retrieved from "https://darktower.fandom.com/wiki/David?oldid=20513"
Community content is available under CC-BY-SA unless otherwise noted.