Edit
“The greatest mystery the universe offers is not life but size. Size encompasses life, and the Tower encompasses size.”
— The Man in Black

The Dark Tower is the center of all creation. It is said to be Gan's body, and is held up by six Beams of great size and length, visible only by their effects on the lands along their lines - such as patterns in the clouds. At each end of the Beams, there is a portal, for a total of twelve. Each portal is protected by a guardian animal. Across the infinite number of worlds, the Tower can only be entered in one: Mid-World. It is necessary to present a sigul of Arthur Eld in order to enter the Tower and in some legends it is believed the Tower itself gave Arthur Eld his Sandalwood Guns and sword Excalibur.

The Dark Tower is surrounded by a huge field of roses called Can'-Ka No Rey. This makes sense because the Towers Twinner, The Rose, is surrounded by towers in New York. Each rose blooms with the light of a thousand suns and each has a beautiful core. The Tower is a six hundred floor spire made of black stone, and the only entrance is a door of ghostwood, with the words "Unfound" written upon it. The tower has a central oriel window which is striated with thirteen different colours which inspired the design of Arthur Eld's crown. In other worlds, the Dark Tower can take a number of forms including a tiger and a black house. The Rose, however, is not simply a manifestation of the Tower, but a completely separate entity. Lesser floors in the tower are less than atoms to greater floors.

In its earliest history, the Tower was wholly magical, as were its supports, and was intended to stand forever. But the Old Ones (the civilization of man that preceded the events of the series by several centuries), confident in their technology, replaced the magical beams with ones that could be broken, as they were derived from machines. The Tower was also used to link its own world to others, some of which the Old Ones themselves visited to see horrific events as entertainment, and some to conduct business.

The Great Old Ones eventually attempted to topple the Tower as well and replace it with a technological replica under the guidance of Maerlyn by releasing the Prim from large cracks, which then formed in the ground and filled with monstrosities. Two examples of these were Mia and Dandelo.

After the assault on the Tower, the Old Ones tried to make amends by creating the Twelve Guardian Animals. These Guardian Animals were technologically engineered by the Great Old Ones to mend the magic of the Beams that was previously assaulted, thus mixing magic and machine. The bulk of the Dark Tower Series recounts the journey of Roland Deschain along the Bear-Turtle beam. The Bear is Shardik and the Turtle is Maturin. The Turtle may be the turtle from It which is said to have vomited up the galaxies. Roland's ka-tet eventually confronts Shardik, who has gone insane.

The Tower from then on was assaulted by the Crimson King using Breakers to snap the Beams supporting the Tower. As the Tower is the lynchpin in the fabric of space-time, these assaults have contributed to the world moving on, or slowly decaying and unraveling.

The Tower is Roland Deschain's life long goal. Roland wishes to breach the Tower, climb to its very top room and question whatever God or Demon resides there. It is his sole mission, and thus he is at odds with those that continue the attempt to destroy it. When he reaches The Tower, Roland came upon The Unfound Door, but it quickly changed to "Found" afterwards.

Different Depictions of The Dark Tower[] 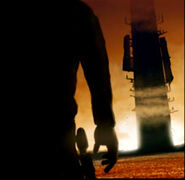