Start a Wiki
“My first thought was, he lied with every word...”
— Robert Browning
Dandelo 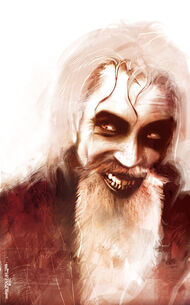 Dandelo (who called himself Joe Collins) was a creature that feeds on the emotions of others. He lived in a house on Odd Lane in the White Lands of Empathica. He appeared as an older man in a pleasant dwelling to Roland Deschain, Susannah Dean, and Oy. He called himself Joe Collins, a former stand-up comedian from the United States. He had a horse named Lippy and held Patrick Danville captive for years.

Role in the Dark TowerEdit

He nearly killed Roland Deschain, Susannah Dean, and Oy while feeding on their laughing response to his comedy stylings. He held Patrick Danville captive in his basement and routinely fed on many of his emotions. Dandelo must have been aware of Patrick's artistic/reality bending ability - as the erasers had been removed from all the pencils Patrick was allowed to use.

Dandelo's ability to feed on emotions and make a dwelling seem larger on the inside and better appointed, seems to be an echo of the abilities of It/Pennywise/Robert Grey from It. Specifically, the scenes in the house on Neibolt Street and when Beverly returns to the Marsh residence as an adult, and encounters Mrs. Kersh. The fudging of Marsh to Kersh may also echo the change of Odd Lane to Odd's Lane (to disguise that it is an anagram of Dandelo.) Susannah surmises that perhaps such creatures have a set of rules that they must follow - which does bear out in It, where It/Pennywise must abide by the rules of the form it takes on, such as a werewolf being vulnerable to silver.

Because of all these connections between both the creature known as It and Dandelo, fans have speculated over if they are one and the same. Stephen King has come out and said that they are not, but that they are most likely of the same species of creature, perhaps some sort of very powerful Todash monster. Similarly, at the end of the novel It, it is revealed that It laid eggs in its home under Derry. Because Derry itself acts like one of the portals to The Dark Tower, it is certainly possible that one of the eggs hatched and the creature found its way to Empathica, which is in very close proximity to the Tower itself, thus meaning that Dandelo is Pennywise's offspring.

Retrieved from "https://darktower.fandom.com/wiki/Dandelo?oldid=20256"
Community content is available under CC-BY-SA unless otherwise noted.