“Might I recline briefly at your feet miss? Your beauty has loosened my knees”
— Cuthbert to Susan Delgado
Cuthbert Allgood 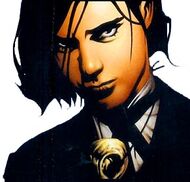 Status
Deceased
Appearances
The Gunslinger
Wizard and Glass
Wolves of the Calla
The Gunslinger Born
The Long Road Home
Treachery
The Fall of Gilead
The Battle of Jericho Hill
Mentioned
The Drawing of the Three
Song of Susannah
The Dark Tower
Little Sisters of Eluria
The Dark Tower: Gunslinger's Guidebook

Cuthbert Allgood is Roland Deschain's childhood friend and a member of his original ka-tet. Cuthbert, often called Bert, first appears as a boy in The Gunslinger, but he does not have a major role in the series until Wizard and Glass. Cuthbert's role in Roland's ka-tet is often that of a "constant joker", leading Roland to make frequent comparisons between Cuthbert and Eddie Dean and to think of him as ka-mai or ka's fool. Cuthbert's ancestry goes back to the days of Arthur Eld. Despite his comedic nature, he is very reliable and can remember every face, name and nuance he sees.

There is a mention of Cuthbert in the Robert Browning poem, Childe Roland to the Dark Tower Came, upon which the series was based.

Throughout the series, Cuthbert is portrayed as being extremely fond of jokes and using humor as a way of dealing with situations. An example of this is the naming of his horse, Glue Boy, a joke referencing the use of dead horse tissue to make glue. Roland has little patience for these continual jokes and expresses frustration that Bert "can't even name his horse like a normal person.".

Though Cuthbert has a fondness for jokes and a childish demeanor, Cuthbert proves to be extremely brave and loyal. He is also very intelligent and has a strong memory. He was in charge of remembering the names of all the people in Hambry. Cuthbert also has a sentimental side. He tears up in the marketplace in Hambry when he sees a "serape" that reminds him of his mother. He was also very upset when Eldred Jonas snuck into the tet's bunkhouse and tore up a photo of Cuthbert's mother and father.

Cuthbert has a special skill with the slingshot. Roland claims that Bert can take a bird on the wing at sixty yards with his slingshot. He demonstrates this skill when he shoots Roy Depape's hand.

Cuthbert is a part of Roland's first ka-tet, along with fellow gunslinger apprentices Alain Johns, Jamie De Curry and Thomas Whitman. In The Gunslinger, we learn that Cuthbert was Roland's closest friend and that the two were nearly inseparable as children, and they had played together since they were in diapers.

Cuthbert and Roland trained to be gunslingers together. On one occasion, Bert is sloppy when releasing David. Cort beats him badly and punishes him further by imposing a fast on him. The two friends sneak into the kitchen and were secretly given pie by Hax. Here, they overhear a conversation between Hax and a guard discussing an act of treason that Hax plans to commit. Hax is sentenced to hanged soon after, and the boys are sent by their fathers to attend, though they were only eleven at the time. They are both afraid to look and join hands as the box is pulled from under Hax's feet.

Cuthbert wields an antique, beer-barrelled, large caliber five shot nickel-plated revolver known as a 'carver.' Additionally he wields a slingshot on the back of his belt, which he can use with great efficiency, being able to hit a bird from 60 yards away. On the left of his belt is a pouch which once contained his father's tobacco, but now holds four dozen steel balls for his sling shot.

In Wizard and Glass[edit | edit source]

He is present when Roland undergoes his test of manhood and is later sent east from Gilead with Alain and Roland after his early test of manhood. The three boys travel to the town of Hambry, in the Barony of Mejis. While in Hambry, Cuthbert uses the alias Arthur Heath. There, Roland meets Susan Delgado and begins an affair with her.

Cuthbert meets a boy in the town of Hambry named Sheemie Ruiz who is mentally handicapped and works as bartender in The Traveller's Rest. Cuthbert saves Sheemie from Roy Depape and the other two Big Coffin Hunters, after Sheemie spilled beer on Depape's boots, earning Sheemie's total loyalty and gratitude. He befriends all of Roland's tet, but maintains a special fondness for Bert, whom he knows as Sai Heath. After Sheemie proves his trustworthiness and usefulness, Cuthbert is able to reveal his real name to Sheemie who pronounces it as "Key-youth-bert". Sheemeie declares it a funny name for a funny man.

Cuthbert becomes angry with Roland as a result of his affair with Susan. Alain is forced to play the peace-keeper at times in order to prevent their fellowship from breaking. At the height of his anger, he hits Roland and forces Roland to question his decisions.

Cuthbert's anger with Roland is partially caused by jealousy. It is mentioned several times that Cuthbert is also attracted to Susan. The other reason for his anger is that he believes Roland has been blinded by his love. He also seems annoyed with the way everyone cites ka as a reason for everything. Cuthbert calls ka "everybody's favorite whipping boy".

Cuthbert carried around a rook's skull which he referred to as "The Lookout" when he came to Hambry. He had an attachment to it and he regarded its loss as a bad omen. The skull was found by the Big Coffin Hunters and used to frame the group with the murder of Mayor Thorin because the people of Mejis had come to recognize the skull.

Cuthbert played an important role in the ambush of Jonas' convoy, carrying the pink bend. His ability with the slingshot was used to silently pick off his men.

Cuthbert, Alain and Roland are fleeing from Clay Reynolds, attempting to return to Gilead. Roland's soul becomes trapped in the Pink Sphere and so Cuthbert has to carry his lifeless body. At one point they cross a bridge and he cuts the bridge's supports so Clay can follow them no longer. Later he has to defend the group from mutie wolves. Eventually Roland returns to normal and they return to Gilead. Cuthbert is not pleased when Roland hides the Pink Sphere from his father and nearly reveals what Roland has done.

He along with Alain Johns and Aileen Ritter help in taking the body of Kingson down to the morgue after he was killed by Cort.

He and Alain save Sheemie from a group of Slow Mutants that entered New Canaan. Later that day, Cuthbert is informed of his fathers death. Upon seeing his father's body, he wishes that he could give up his father's guns to bring him back. He survives the fall of Gilead and has to flee with the few remaining others.

He aids in destroying the Cult of Amoco and with Roland discovers Randolph's betrayal when he finds Farson encampment a few miles form theirs. It is then that Roland gives him the Horn of Eld after Roland accidentally kills Alain. He beats Randolph but does not kill him for his betrayal.

In the battle of Jericho Hill, Cuthbert is killed with an arrow through the eye by Roland's arch nemesis, Randall Flagg, who was using the alias Rudin Filaro at the time. He fought on despite his wounds and Roland held him up until he died. He fell, laughing to the very end. Cuthbert was given possession of Roland's Horn during the battle and attempted to blow it. After the battle, Roland neglected to retrieve the artifact from his friend. However, upon the resumption of Roland's next quest for the Tower, he has the horn with him. This suggests that perhaps Roland will become free of the Tower's cycle.

SPOILER ALEART AHEAD! Both Eddie and Cuthbert are killed in a similar fashion. Cuthbert is shot through the eye with an arrow at the battle of Jericho Hill, while Eddie is shot above the eye with a bullet.

The character of Stephen King goes so far as to state under hypnosis that Eddie and Cuthbert are "twins".

Retrieved from "https://darktower.fandom.com/wiki/Cuthbert_Allgood?oldid=20499"
Community content is available under CC-BY-SA unless otherwise noted.