The Dark Tower Wiki
Register
Don't have an account?
Sign In
Advertisement
in: Tie-In Characters, The Red, Men,
and 3 more 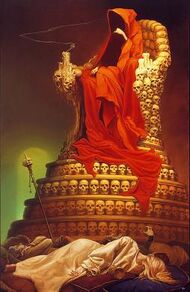 “I am the Eater of Worlds.”
— Crimson King

The Crimson King is the main antagonist of The Dark Tower Series. He is the orchestrator of the chaos and decay in the Keystone World and much of that in all the other worlds connected by the Dark Tower. His ultimate goal is to tear down the Tower, bring about Discordia, and re-make the universe in his own image.

Susannah Dean sees the Crimson King as being equivalent to "Satan" in the religions of her own world. However, this is a simplification of the true origin of "Le Roi Rousse."

As the Deschain bloodline (that of gunslingers Steven and Roland) and the bloodlines of Roland's first ka-mates such as Cuthbert Allgood are descended from the ancient King of All-World, Arthur Eld, so is that of the Crimson King. Walter admits as much while greeting Mordred, acknowledging both of Mordred's fathers (Roland and the Crimson King) as descendants of Arthur Eld. It is revealed during The Long Road Home that he is a direct son of Arthur Eld; Arthur sowed his seed in many women including one from the Prim and so he was born. This explains why he is not human, but rather a shapeshifter capable of taking a human-like form. These powers may also explain why his actions, however small, can affect the worlds. It is noted in The Long Road Home that him talking can alone cause a sleeping infant to die. His son Mordred's "true form" is described as being closer to that of the human-sized spider he sometimes appears as. A reference in the final volume of the series to the Crimson King as "the great scuttering spider-king" suggests that this is a case of like father, like son (both are Were-Spiders).

Role in the Dark Tower Series[]

He is seen during The Gunslinger Born very briefly when he is contacted by Marten Broadcloak, they discuss Roland passing his test of man-hood which angers the Crimson King.

He is then not seen till the next comic The Long Road Home in which he meets Roland for the first time, revealing to him their shared ancestry, asking Roland to join his side and destroy all the worlds so the people of the Prim can be free again; Roland refuses and escapes when Sheemie attacks the king.

He is alluded to in The Gunslinger by preacher woman Sylvia Pittston, who believes Walter/Marten/Flagg has impregnated her with the King's son. This turns out to be a red herring.

Walter, when confronted by Roland at the end of the first volume, reveals that the King appeared to him in his boyhood, probably imbuing him with some of his powers in the process. Yet for most of Walter's preternaturally long lifespan, he was not consciously doing the King's bidding; his service to the Crimson King was "a late thing", which began "a sheaf of centuries ago" (Walter having lived for several thousand years). Walter has not physically encountered his master, who speaks to him only through visions.

Between The Drawing of the Three and Wolves of the Calla[]

Between the first and fifth volumes the Crimson King is barely mentioned at all, with antagonistic factions such as the men of Hambry and the warring tribes of Lud apparently having independent motivations - although later volumes heavily imply that in all the decay and destruction of Roland's world, the Crimson King had a part. Certainly, Farson himself was as much a chess piece on the King's board as Walter. He made or had made for him a giant machine called An Tak or the Big Combination ran by children who failed as possible Breakers. An Tak's purpose was to spread disharmony through the multiverse. An Tak is most likely the same as The King's Forge mentioned in Song of Susannah and DT7.

Song of Susannah and The Dark Tower[]

The final two volumes are more specific regarding the King's actions; he intends to dominate the Dark Tower itself, initially by tearing it down. Ted Brautigan theorizes that while the collapse of the Tower will bring about the end of existence itself, the Crimson King believes that he and possibly his creatures will carry on in their own universe. Mordred, while experiencing frustration with a machine, thinks it no wonders that the Crimson King wants to tear it down and start over. To that end, the King has been using teams of captive telepaths, the Breakers, to erode the Beams supporting the Tower.

The foiling of this plot by Roland and his ka-tet in the final volume is not enough to stop the Crimson King. After destroying the remnants of his realm, he commits a violent suicide and continues toward his goal - the Tower - as an Undead creature, there to confront Roland as prophesied by Patrick Danville. Even though by the end of the final volume, he is diminished in power and greatly aged as a result, to Roland he still looks like "Hell itself."

The Crimson King's first major appearance is not in the Dark Tower series of books but in Insomnia. In a confrontation with that novel's hero Ralph Roberts, he initially takes the form of Ralph's mother that died twenty-five years ago from cancer, then changes to a man whose skin is flushed red, as if engorged with blood, before shape-shifting towards the creature of Ralph's deepest nightmare. There is a debate whether the Crimson King is "It" as he hints to Ralph Roberts "[...] I can be whatever I want. You may not know it, but shape-changing is a time-honored custom in Derry." Another reason why the Crimson King is believed to be Pennywise is due to the Deadlights that appear while the Crimson King is moving to higher levels of the Dark Tower Later in the novel, the boy Patrick Danville draws a picture of Roland facing the tower; in the painting, the Crimson King is shown at the Tower's top.

The Crimson King is also a character in King's novel Black House. In Black House, he is a powerful being that is responsible for the taking of children who will eventually become breakers or workers for Big Combination, a power plant that spreads disharmony. The Crimson King is revealed to have tried to destroy The Dark Tower for many millennia, and it is not until the fall of Gilead that the Crimson King was able to make true progress on destroying the beams. While the Crimson King's physical form is trapped on the balcony of the Dark Tower, similar to how IT exists as a physical being on earth as well as metaphysical in the Deadlights, he has another manifestation that resides in the Can-tah Abbalah, the Court of the Crimson King. After Ty Marshall destroys the Big Combination, it severally weakens Los' and a Hell Hound that earlier in the book protected the Black House from unwanted visitors.

It is likely that Stephen King drew inspiration for the character of the Crimson King from King Crimson's song, The Court of the Crimson King, a psychedelic opus describing cataclysmic events occurring to entertain the King of the court.  Furthermore, the Crimson King's position in the Dark Tower, as well as his sigil, the Eye, hints at his being inspired by J.R.R. Tolkien's Sauron. The link to Sauron is made explicit in Insomnia, both through narration and the fact that a ring is a key to his defeat in that book. Stephen King in an interview with George R.R. Martin explains that the Crimson King is his version of Sauron.

Another Possible Inspiration for the Crimson King is Morded from Arthurin Legend. As His origin establishes him as the Antagonistic son of King Arthur(Arthur Eld) Crimson Kings own son being named Mordred is likely a reference to this.