“Fools are the only folk on the earth who can absolutely count on getting what they deserve.”
— Cort
Cortland Andrus 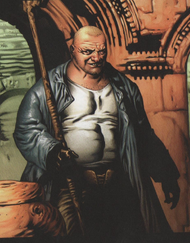 Cortland Andrus was one of Roland Deschain's two instructors during gunslinger training, the other being Abel Vannay. He appears only in flashbacks, having died before the present story begins, but still plays a prominent role in The Gunslinger and, as the man from whom Roland acquired much of his prowess, is frequently mentioned in the following six volumes. Apart from one reference in the final book he is not referred to by his full name, only as "Cort".

Cort is physically described as being squat and muscular, even across his paunch, bald and one-eyed and covered with scars from head to toe. Although he permitted himself an occasional smile, Roland notes that he "never laughed".

Eddie Dean's impression of Cort, from Roland's spoken account, is that he was, "the drill instructor from Hell".

Although not himself a gunslinger, that title being reserved for the nobility and their sons, in Wizard and Glass it is mentioned that as a boy he had witnessed the defeat and subsequent exile of trainee Eldred Jonas by instructor Fardo Andrus, Cort's own father, as he often watched his father train the Gunslingers to gain some experience in gunslinger training himself. He later served in the military, acquiring an "infantry belt", before taking up instructor duties. In his spare time he was unmarried and lived alone, but enjoyed the company of whores and was described by Roland as a "wild midnight carouser". At the time of Roland's testing, Cort lost an eye to Roland's hawk, David.

Role as a Teacher[edit | edit source]

While Vannay, the other gunslinger trainer, dealt with the philosophical, Cort was more orientated towards the physical aspects of instruction. His training was augmented by daily violence for the slightest hint of shortfall or weakness. Ordinarily, he used his fists but Roland observes that if Cort had caught himself, Cuthbert Allgood and Alain Johns for one particular infraction he would have "striped us bloody". Eventually, each pupil would either drop out of training under his harshness or challenge the instructor to an arranged single combat; the boy bringing the weapon of his choice, the instructor choosing his weapon after the pupil did. If the boy took the instructor's club, the boy became a fully-fledged gunslinger; if the instructor defeated the boy, the boy was disowned, banned from Gilead and sent West into exile. Such a ritual, while dangerous to the aspirant gunslinger, could also be hazardous for the instructor; Cort's predecessor Mark had died from a knife wound during one of these trials.

The range of physical training is varied and he gives lesson in hand-to-hand combat, weapon use, hunting and tracking skills, navigation techniques and battle planning. Although specialising in the physical he and Vannay both taught the Way of Eld.

Roland, at fourteen, was the youngest pupil ever to challenge his instructor, beating his father Steven's record by two years. At the trial, Cort was dismayed to see Roland's weapon of choice was David the hawk; Roland himself suffered some guilt for this in the following years, regarding it as "the first of many betrayals." Roland won the battle at the expense of David's life; Cort lost an eye and was in a coma for a week, but before slipping into unconsciousness still managed to impart some advice to Roland.

He discovered that Kingson cheated during the riddles competition during the gunslingers' coming of age ceremony. He killed Kingson and found a signet ring inside his pocket, proving that Kingson was one of Farson's men.

Cort with Abel and Steven Deschain realise Kingson was here for Maerlyn's Grapefruit, Steven then instructs them to search his room for clues. Cort finds the Poisoned Book and becomes heavily ill from it. His illness is incurable as he is told by Laird De Curry and the Gunslinger Apprentices come to say their goodbyes to him. He dies after Aileen visits him asking her to remember his teachings so that he lives on through her. While his body is being prepared for burial by Abel, Abel is killed by one of Gilead's Guards.

Retrieved from "https://darktower.fandom.com/wiki/Cortland_Andrus?oldid=20237"
Community content is available under CC-BY-SA unless otherwise noted.