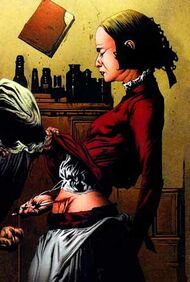 Cordelia Delgado is the aunt of Susan Delgado and the sister of Pat Delgado. She is very thin with an unhealthy obsession with money and property, which fuels her immense capacity for self-delusion. It is not revealed whether or not she continues her brother's business.

Role in Wizard and GlassEdit

When she was in dire need her brother Pat allowed her to stay with him and his daughter.

Cordelia's love of money puts her at odds with her niece, Susan. She convinced Susan to bear the Mayor Hart Thorin an heir so they could maintain their land; however, Cordelia deceived Susan, as Hart wanted a long term gilly. When Susan falls in love with Roland, Cordelia goes insane with paranoia and concern that Susan has lost her virginity and invalidated her contract with the mayor. She allows Rhea of the Cöos to drink her blood for nourishment so that she may get her revenge upon Susan. She is one of the leaders of the mob that throws Susan onto the Reap Day bonfire.

It is hinted that Cordelia may have known something about the true nature of her brother's death. This may have been wilful blindness rather than actual involvement. Certainly, when Susan chanced upon evidence implicating the men of Hambry, she did her best to dissuade her from further investigation.

Roland never acquired definitive evidence of Cordelia's death but by all accounts she only outlived Susan by a few seconds, dropping dead on the spot after her niece's last words. While the citizens of the Keystone World would have classified her cause of death as a 'massive stroke', no doubt as a side effect of her growing insanity and emotional turmoil reaching its climax, the adult Roland hypothesized that she had experienced a sudden moment's realisation of the true enormity of what she had done.

Cordelia had a very poor relationship with Susan. When she emotionally forced Susan to become Thorin's gilly, Susan became very angry and acted rudely to Cordelia. It is later revealed that, Cordelia is very jealous of Susan's youth and beauty, as she often called the girl "Miss Oh So Young And Pretty."

Retrieved from "https://darktower.fandom.com/wiki/Cordelia_Delgado?oldid=20277"
Community content is available under CC-BY-SA unless otherwise noted.