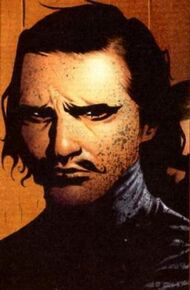 
The Sorcerer
Mentioned
Wolves of the Calla
The Dark Tower: Gunslinger's Guidebook

Clay Reynolds is a member of the Big Coffin Hunters and has followed Eldred Jonas since he was fifteen. Roland Deschain and his ka-tet encounter him in Hambry. He is smarter than Roy Depape but not as sly as Eldred Jonas, a vain womanizer, and walks with his left foot turned in.


He never seeks praise from Eldred and never learns that they were hired by Kimba Rimer instead of Hart Thorin.

It was he who took Susan Delgado to the Charyou Tree to be burned.


His deep-seated resentment of Kimba Rimer after Rimer's off-hand comment about Reynolds's cloak meant that when Mayor Thorin was killed by Roy Depape, he took his revenge by killing Rimer. Both acts were done in the hopes of further framing the three gunslingers, Roland, Cuthbert and Alain, .

He chases Roland and the other two gunslingers when they flee Hambry but has to stop when he reaches the Xay River Canyon as Cuthbert has destroyed the bridge there.


Later, he and Coral Thorin become lovers. She follows him to John Farson's camp before The Fall of Gilead. Farson is livid that Reynolds does not have the Pink Sphere and severely beats him.

Eventually Reynolds and Coral form a gang of bank robbers. Reynolds is captured by the sheriff in the town of Oakley along with the remainder of his gang that survived the shootout and hanged.

Retrieved from "https://darktower.fandom.com/wiki/Clay_Reynolds?oldid=19229"
Community content is available under CC-BY-SA unless otherwise noted.