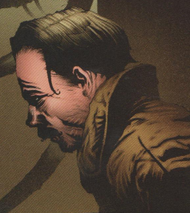 Christopher Johns is the father of Alain and a direct descendant of Sir Alfred Johns. He began his gunslinger training at the age of six and there met Steven Deschain and Robert Allgood winning his guns at the age of eighteen. He was well known for his quick temper earning him the name "Burning Chris" however now he has calmed, aided by his wife's ability with 'the touch' and is now a well respected and influential gunslinger.


He followed his family tradition, marrying a womAn from the Manni tribes which is why 'the touch' runs strongly within their family. However 'the touch' remains latent in Christopher.


He is present when his son leaves for Hambry and is later present when Alain undergoes his coming of age and is made a true gunslinger.


He is part of an expedition to stop a group of Farson's men which is successful.

He later accompanies Steven and Robert out of Gilead to follow John Farson and Marten Broadcloak. They lose them and on the return journey are attacked by a groop of Slow Mutants. Robert is killed and so he and Steven carry back his body. He again follows Steven to attack Farsons forces when Justus' betrayal is realised and in the ensueing fight only he and Steven survive. He then dies at the hand of Gilead's Guards upon his return to Gilead when they cut his throat.

Retrieved from "https://darktower.fandom.com/wiki/Christopher_Johns?oldid=17854"
Community content is available under CC-BY-SA unless otherwise noted.