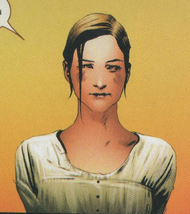 Chloe is the wife of Randolph and mother of Edmund.

She worries Randolph is too protective and doesn't rest enough and asks him to rest for a while. She is later abducted with her son by a Slow Mutant while gathering food. She is later killed by Marten Broadcloak as Randolph is late to a meeting with him.

Retrieved from "https://darktower.fandom.com/wiki/Chloe?oldid=12930"
Community content is available under CC-BY-SA unless otherwise noted.