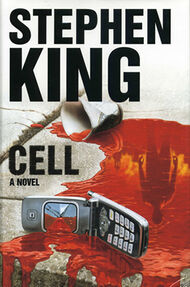 Cell is novel written by Stephen King, published in 2006. It follows Clay Riddell, a graphic novelist, and his companions after "the Pulse"- a virus spread through cellphone waves. Clay and his companions travel to find his son, and uncover a plot by 'the phone-crazies'.

Artist Clayton Riddell had been in Boston negotiating a successful deal to sell his comic book project. His joy at finally hitting it big is shattered by an event called The Pulse which causes all those who were using their cell phones at the time of The Pulse to become zombies attacking and killing anyone in their way. Fortunately for Clay, he does not own a cell phone. In the panic to get out of Boston and find his way home to his wife and son in Maine, he is joined by Tom McCourt, a man he meets in the meleé immediately following The Pulse and a young girl, Alice, who they rescue from being killed by one of the “crazies.” The story follows their terrifying journey, avoiding capture—and worse—by the “crazies” who are beginning to “flock” and are led by one they call Raggedy Man as they attempt to reach Maine and a place called Kashwak which they hope will be their salvation.

Connections to the Dark TowerEdit

Retrieved from "https://darktower.fandom.com/wiki/Cell?oldid=14531"
Community content is available under CC-BY-SA unless otherwise noted.