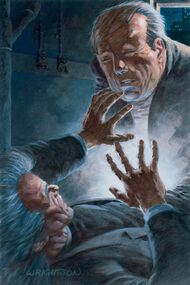 
Wolves of the Calla

Calvin Tower was the owner of The Manhattan Restaurant of the Mind . He ran the place along with his friend, Aaron Deepneau. His last name was originally Toren, the Dutch word for tower, and was the third-great-grandson of Stephan Toren. He owned a ring with a book on it and the inscription Ex Libris.

Calvin was not a very successful businessman. He bought antique books and couldn't bear to part with them. He had a huge storehouse of books behind his store. He was deep in debt and used to own a great deal of property, but sold the land off in order to pay his debts. The only land he had left by the time of the events in The Dark Tower series is the vacant lot on the corner of Second Avenue and Forty-Sixth Street in New York City.

His first appearance came in The Waste Lands when he sold Jake Chambers two books: Charlie the Choo-Choo and Riddle-De-Dum.

In Wolves of the Calla, it is revealed that he and Deepneau had once saved Father Callahan from The Hitler Brothers.

Previously, he had entered into a contract with the Sombra Corporation, promising not to sell the vacant lot to anyone but Sombra for a year. The contract expires on July 15, 1977 and was counter-signed by Richard Sayre. His bookstore was burned down after he refused to sell to them. Fortunately, Tower and Deepneau had fled to Stoneham, Massachusetts. However, he did leave a very easy trail to follow that allowed Enrico Balazar and Jack Andolini to find him.

After Roland Deschain and Eddie Dean escaped from the ambush set up by Andolini, they went to find Tower and make him sell the vacant lot to the Tet Corporation. Tower was reluctant to sell and only gave in after a great deal of persuading.

As revealed in The Dark Tower, Calvin contributed to the efforts of the Tet Corporation. It was his suggestion to form a group of psychics able to predict the future. He discovered this idea in a book written by Ben Slightman the Elder under the pseudonym Daniel Holmes. His name was also lent to a group of researchers called the Calvins, a group whose sole purpose was to scour Stephen King's books for references to the Keystone World.

Retrieved from "https://darktower.fandom.com/wiki/Calvin_Tower?oldid=13860"
Community content is available under CC-BY-SA unless otherwise noted.