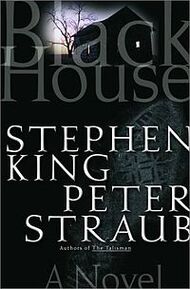 Black House is a horror/fantasy novel written by Stephen King and Peter Straub. It is the sequel to their previous collaboration, The Talisman. There are rumors of a third Jack Sawyer novel possibly happening.

The novel continues the story of Jack Sawyer, who is now a retired police detective.

20 years after the events of The Talisman, "Hollywood Jack" Sawyer is a former LAPD detective living in the small town of French Landing, Wisconsin. He is reluctantly drawn out of retirement when FL's chief of police asks Jack's help in hunting down a cannibal serial killer dubbed "the Fisherman," who has been abducting and murdering children in the area.

The killer, 85-year-old nursing-home resident Charles Burnside, is "consensually possessed" by a sadistic demon called Munshun. Mr. Munshun is a servant of the Crimson King, tasked with acquiring child-slaves and searching for new Breakers. Tyler Marshall, the Fisherman's latest abductee, is an extraordinarily powerful Breaker--maybe powerful enough to bring the Tower down himself.

Jack learns all of this when he finally accepts the reality of his own repressed memories and "flips" into the Territories for the first time since he was 12. There he reunites with his old friend Speedy Parker's Territories twinner, the nigh-gunslinger called Parkus. While in the Territories, Jack meets and falls in love with Sophie, the beautiful young queen of that place, and realizes Sophie is a twinner of Judy Marshall, Tyler's mother.

After hearing rumors of a cursed house outside town, Jack intuits that the Fisherman is the house's architect: Charles Burnside.

Among other things, Black House is a door between worlds. After a wild killing spree that includes the murder of Jack's best friend, the mortally wounded Burnside leaves Black House and escapes to a hellish, volcanic region of End-World called the Furnace Lands, where Tyler Marshall is being held prisoner. When Burnside disobeys Munshun's order to deliver Tyler to the Crimson King and instead tries to take the boy for himself, Tyler fights back and kills him.

The "Sawyer Gang," made up of Jack, Chief Gilbert, and the surviving members of the Thunder Five (a part-time biker gang led by the father of one of the Fisherman's victims), make their way through the traps and horrors of Black House and arrive in the Furnace Lands. There they battle Munshun, and Jack finally slays the demon using a baseball bat infused with residual energy from the Talisman. Jack compels Tyler to destroy the Big Combination (the Crimson King's skyscraper-sized "power plant") and free the thousands of stolen children who were forced to toil there. As Tyler is reunited with his family, refugee children from multiple worlds pour out of Black House before the house itself is destroyed.

Weeks later, on stage at a police press conference, Jack is shot by the wife of a man he put away when he was still on the force. Speedy Parker is in the audience and manages to flip Jack into the Territories just before he dies.

As Jack lies unconscious in the Queen's Pavilion, Parkus explains to Queen Sophie that while Jack will recover, he is now "a creature of the Territories," and may never be able to return to his own world.

Jack first meets Sophie in one of the Little Sisters' hospital tents.

Jack, Parkus, and Sophie have their long palaver in a Speaking Ring, though Parkus explains that the demon who once resided there is long gone.

Parkus carries a hard calibre revolver with sandalwood grips, like those worn by gunslingers. Sophie greets him with, "Hile, gunslinger!" but Parkus insists he is not a true gunslinger. However, his mannerisms, knowledge, and use of the High Speech suggest he is in some way affiliated with what he calls the "ancient war-guild of Gilead."

The Furnace Lands are located in End-World, and it is implied that the Territories (also called the Borderlands) may exist on the same level of the Tower as Mid-World. In the final chapter, the Territories are said to be in the Inner Baronies, suggesting it is part of In-World.

Burnside mentions Blaine and Patricia, and speaks of a third monorail, still in working order, simply called "the End-World Mono." Munshun plans to use the mono to deliver Tyler to the Abbalah.

The concept of "beam-breaking" makes its debut in Black House. The demon Munshun is a servant of the Crimson King tasked with gathering psychic children to use as Breakers, as well as acquiring child-slaves to toil in the Big Combination, a skyscraper-sized power plant of unknown purpose located in the Furnace Lands. Munshun employs geriatric serial killer Charles Burnside (a.k.a. the Fisherman) as his human agent.

Morgan of Orris, the evil wizard from The Talisman, is said to have also been a servant of the Crimson King.

The Crimson King's name is revealed (in the Language of the Dead) as Ram Abbalah.

Other Language of the Dead terms make their first appearance in Black House, including can-tah ("little gods"), can-tak ("big gods"), can-toi (servants of the can-tah/can-tak), and gorg ("death"). The phrase Can-tah Abbalah is translated as "the Court of the Crimson King," and is used to refer to those who serve directly under the Abbalah.

Black House itself may be an avatar of the Dark Tower.

The use of the word, "opopanax". In Black House, its definition is given as "describing a word that cannot be found in the dictionary." In Wolves of the Calla, it is the feather that is passed around Calla Bryn Sturgis to signal a town meeting.

In The Dark Tower, Walter/Flagg dons a metal cap similar to the one the Fisherman puts on Tyler Marshall when he confronts Mordred Deschain. Flagg describes the cap as having been "borrowed from a certain deserted house in the town of French Landing, Wisconsin."

Retrieved from "https://darktower.fandom.com/wiki/Black_House?oldid=20327"
Community content is available under CC-BY-SA unless otherwise noted.