The Dark Tower Wiki
Register
Don't have an account?
Sign In
Advertisement
in: The Dark Tower Characters, Residents of Gilead, Men,
and 2 more 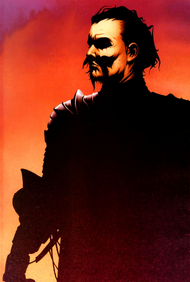 Arthur Eld was the ancient King of All-World and the greatest of mythical heroes in Mid-World, equivalent to King Arthur in the legends of our own Earth. He was a warrior of the White and a guardian of the Dark Tower.

Over a thousand years after the demise of the Great Old Ones Arthur is purported to have carried his sword Excalibur out of a Kashamin Pyramid where he had been entombed, a legend which is depicted in many paintings throughout Mid-World. Some people even believe he pre-dated the Old Ones and ruled as the first king after the Prim receded.

Arthur emerged as a young warrior with incredible prowess for battle and an ability to inspire greatness in people. Warring clans forged alliances, Baronies began to group together to form the first parts of the Affiliation and the technology of the Old Ones began to see use again. Arthur led the new Affiliation to fight against the harriers and mutants that plagued their lands, defeating the agents of chaos led by Maerlyn and triumphantly restoring order again to the earth. People often say that Nis inspired him to unite the world together.

At Arthur's coronation as High King of All-World he pledged he and his descendants would protect the Dark Tower and stop the earth falling back into ruin. Many other legends surround his coronation, one of them claiming that during the coronation banquet Maerlyn and magical followers of the Prim arrived uninvited and bearing gifts. These gifts were Maerlyn's Rainbow which were offered to the newly crowned king. Maerlyn and his followers eventually revealed their true nature and feasted on several members of the court. Arthur somehow managed to survive the encounter although he had impregnated the Crimson Queen who one year later gave birth to the Crimson King. It is noted that Sir Kay Deschain died protecting Arthur from the Crimson Queen.

When Arthur discovered his own queen Rowena to be barren, he took over forty gillies. The line of Deschain (the line of such gunslingers as Steven and Roland) is descended from one of them, Sir Kay's daughter Emmanuelle. It is through this line that the Horn of Eld and the sandalwood guns that were forged from the sword Excalibur itself were handed down, although there are other legends to the guns' origins. It is rumoured that only someone who carries Excalibur or another sign from Arthur Eld may enter the Dark Tower.

He banned the human sacrifices of the Reaptide Festival, though it carried it on regardless and so he had to compromise, he deemed one person in all of All-World would be sacrificed at the Ghostwood/Charyou Tree each years. Ultimately, his gilly Emmanuelle would burn on a Charyou tree and his wife would give birth to a Were-Spider who would kill her and be killed in turn.

In the months afterward, a ghost-like apparition of Rowena began to wander the halls and grounds of the castle. Arthur, stricken by the guilt of forsaking his wife which contributed to her death, followed the apparition into the woods and through a doorway which lead to a dogan, where he was captured and held for months. His form and memories were used to create an army of undead golems that terrorized New Canaan nightly for months. Ultimately, he was rescued by Sir Alfred Johns and Sir Bertrand Allgood with the assistance of the Guardians of The Beam.[1]

During the twelfth year of his reign Arthur is known to have killed the creature Saita. It was this that made him realize his knights also needed guns and so he set up Hendrickson to supply firearms. A second enterprise, Hemphill was also created in order to reduce the number of mutant stock in the Kingdom.

In total, Arthur ruled for seventy years and for a time after his death the Kingdom of All-World remained unified, eventually fragmenting into independent baronies. His crown held thirteen different coloured gems, each one a striation in the Dark Tower's central oriel window.

In Evil Ground, after Roland blows the Horn of Eld, Arthur leads into battle an assembly of warriors to combat some ghouls.