Andy the Messenger Robot (Many Other Functions) 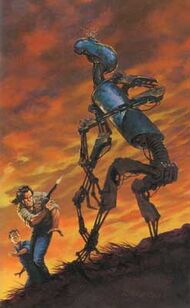 Andy the Messenger Robot or simply Andy, appears in Wolves of the Calla. He is initially portrayed as a friendly robot, fond of telling horoscopes. He is the bearer of bad news for Calla Bryn Sturgis; he gives forewarning about the coming of the Wolves.

Later, it is revealed that Andy is helping the Wolves, by telling them where all the children are. He does this through the Dogan. He was destroyed by Eddie Dean after his treachery was revealed.

He was created by LaMerk Industries and North Central Positronics as part of their Asimov Robots line.

Retrieved from "https://darktower.fandom.com/wiki/Andy?oldid=20241"
Community content is available under CC-BY-SA unless otherwise noted.