“Thus fell Lord Perth, and the earth did shake with that thunder”
— Flagg upon the Tick-Tock Man's passing
Andrew Quick 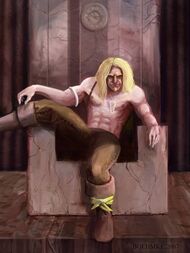 Andrew Quick, also known as the Tick-Tock Man, was the leader of the Grays in the city of Lud. Quick was the great-grandson of the famous harrier, David Quick. He had an obsession with clocks and other time-pieces. His ultimate goal was to take over Lud and destroy the Pubes.

Quick's first appears in the series after his servant, Gasher, kidnaps Jake and returns to his base in the under-works of Lud. Quick means to re-educate Jake and use him in his plot to conquer Lud. Roland and Oy soon come upon Quick's base and cause confusion. In the struggle, Jake shoots Quick in the head and they leave him for dead. However, Jake, inexperienced gunslinger that he was, didn't realize that the shot he had fired had actually ricocheted off of Quick's head, lacerating the scalp but leaving the skull itself unbroken.

A dark man with the appearance of a gunslinger comes upon the dying Quick under the name of Richard Fannin and saves his life, minus the skin on his scalp.

Walter takes him to the Emerald City where he has him play the role of Oz. In the end of the book, he made his appearance, trying to scare Roland's ka-tet. Oy discovers him behind the curtain and he is shot dead by Eddie and Susannah.

Retrieved from "https://darktower.fandom.com/wiki/Andrew_Quick?oldid=20203"
Community content is available under CC-BY-SA unless otherwise noted.