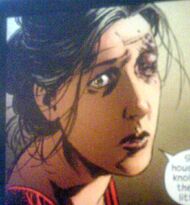 Alice, nicknamed "Allie", is the proprietor and bartender of the bar, Sheb's, in the town of Tull. While her age is not specifically stated it is assumed that she is in her late forties due to her mentioning pre-menopause. Roland Deschain meets her while in pursuit of the Man in Black in The Gunslinger. Roland decides to stay with her for a number of days while he asks around town about the Man in Black and the desert to the west.

She is described as being beautiful, but she has a major scar in her forehead. In exchange for information about the Man in Black and Nort, Roland agrees to sleep with her. She was given a letter by the Man in Black, telling her to say the word "Nineteen" to Nort in order to learn about death. She eventually succumbs to the temptation knowing that the knowledge will drive her mad. She asks Roland to put her out of her misery, which he does, knowing that Sheb McCurdy (who was holding a knife to her throat during Sylvia Pittston's attack in The Battle of Tull) would probably kill her anyway.

(Note this outcome is in the revised edition and should be considered canon over the 1982 edition, in which Roland just kills Allie without Sheb holding the knife).

Retrieved from "https://darktower.fandom.com/wiki/Alice?oldid=16641"
Community content is available under CC-BY-SA unless otherwise noted.