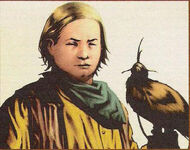 Status
Deceased
Appearances
The Gunslinger
Wizard and Glass
The Gunslinger Born
The Long Road Home
Treachery
The Fall of Gilead
The Battle of Jericho Hill
Mentioned
The Drawing of the Three
The Waste Lands
Wolves of the Calla
Song of Susannah
The Dark Tower
The Dark Tower: Gunslinger's Guidebook

Alain Johns is Roland Deschain's childhood friend and a member of his original ka-tet and ka-tel (class). He was one of the first friends Roland had (along with Cuthbert). He first appeared in The Dark Tower I: The Gunslinger, but he didn't have a significant role. His first major appearance was in Wizard and Glass, when Roland's love story with Susan was revealed.

He is often awkward during conversation and often takes a long time to contemplate a question. This has made many people think he is dull and stupid although in reality he is very thoughtful and diplomatic, reserving his voice for reason. He is very slow to anger, but once mad he can be extremely dangerous. Also, he's more likely to cry than the other two members of his ka-tet (Roland and Cuthbert), which is shown in the fight Roland and Cuthbert had after Cuthbert discovered the letter of Rhea of the Cöos

Alain wields an antique, beer-barrelled, large caliber five shot nickel-plated revolver known as a 'carver' and also carries with him the book Homilies and Meditations by Mercer.

Alain is strongest in "the touch", a type of psychic power, akin to but not identical to the Shining from Stephen King's prior writing. This allowed him to know Roland was undergoing his test of manhood without Roland telling him. He was present when Roland underwent this test.

Alain plays a main role within The Long Road Home as he realises Roland's soul is trapped inside Maerlyn's Grapefruit; as he has "the touch" he makes numerous attempts to free him from its clutches. At one point he is severely injured by mutie wolves but is healed by Sheemie not long afterwards.

He along with Cuthbert Allgood and Aileen Ritter help in taking the body of Kingson down to the morgue after he was killed by Cort.

He alongside Cuthbert saves Sheemie from a group of Slow Mutants. He survives the Fall of Gilead and has to flee with the few remaining others.

Alain saves Sheemie from death during a Beam-Quake, later feeling mistrust and unease towards Randolph but does not believe he has betrayed them. He helps destroy the Cult of Amoco with his fellow Gunslingers and, with General DeMullet at Rimrocks, realizes Randolph's betrayal when they are ambushed by Farson's men. In an attempt to warn Roland, he is killed by Roland and Cuthbert, who mistake him for one of Farson's men.

In the second book of the series(The Drawing of the Three), when Roland Deschain was hallucinating in the coast, he remembers that both him and Cuthbert killed Alain, but the reason is actually unknown. In the fifth book (Wolves of the Calla) Roland dreams of Battle of Jericho, specifically of the moment he and Cuthbert shot Alain, mistaking him for enemy.

Of Roland's new ka-tet, Jake Chambers is most like Alain. It is hinted that Jake may be even stronger in the touch.

In the original version of The Gunslinger Alain's was actually named Allen, and then was replaced with Alain in the 2003 version. Also in The Drawing of the Three we see it spelled as Alan.

Retrieved from "https://darktower.fandom.com/wiki/Alain_Johns?oldid=20507"
Community content is available under CC-BY-SA unless otherwise noted.