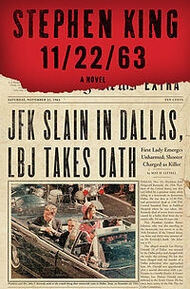 A man named Jacob "Jake" Epping is friends with a successful local diner owner, Al Tempelton. Al tellas him a secret. In his closet there is a "rabbits hole", or portal, that goes back to September 9th 1958. Al is too old to go on his mission so he elects his English teacher of a friend, Jake Epping. He gets Jake to go and try to stop the JFK assassination. Jake goes back in time to when everyone was a friend and cars cost a few hundred dollars. He must bide his time and get ready to change history.

In the "new 2011" Takuro Spirit car is mentioned. This is the car that the ka-tet see in Topeka during Dark Tower book IV Wizard and Glass.

The number 19 is used various times. When Jake Epping sees a Plymouth Fury the license plate number is 90-811 which adds up to 19. His license plate also adds up to 19, 23383IY. The for rent sign in New Orleans says to call MU3-4192 and that adds to 19. And, the Dunnings live at 379 Kossuth St. in Derry. This address adds up to 19. 19 is a recurring number in a majority of Stephen Kings works and not only The Dark Tower.

One of the characters, Beverly, asks Jake if "he knows about the turtle." This may or may not be a reference to the Turtle Maturin in The Dark Tower Series.

Retrieved from "https://darktower.fandom.com/wiki/11/22/63?oldid=19701"
Community content is available under CC-BY-SA unless otherwise noted.