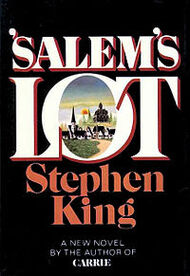 'Salem's Lot refers to two things in the continuum of the Dark Tower series. It is both a town located on one level of the Tower and a book by Stephen King.

Wolves of the Calla[edit | edit source]

'Salem's Lot is mentioned in The Dark Tower V: Wolves of the Calla after Roland's ka-tet meets Father Callahan.

When Roland's ka-tet palavers with Pere Callahan he tells them of his origins. Callahan was once a priest in a town called 'Salem's Lot until an occurrence made him flee the town.

On the level of the Tower that Calvin Tower and Aaron Deepneau reside, Eddie is entrusted with a collection of Tower's finest books. Eddie brings them through the door the ka-tet finds in the Calla. Later Pere Callahan would shuffle through the book and find 'Salem's Lot (the novel) as written by Stephen King.

The book chronicled the events of the time the writer, Ben Mears, and the vampire, Kurt Barlow, came to 'Salem's Lot. This incident would lead to a confrontation between Callahan and Barlow in which Callahan's faith would fail him (he was also forced to drink Barlow's blood, making him cursed) and he would leave town in shame, after touching his church's handle burned his hand. Stephen King's book re-told all these events, leading Callahan to wonder what was real.

Retrieved from "https://darktower.fandom.com/wiki/%27Salem%27s_Lot?oldid=13108"
Community content is available under CC-BY-SA unless otherwise noted.